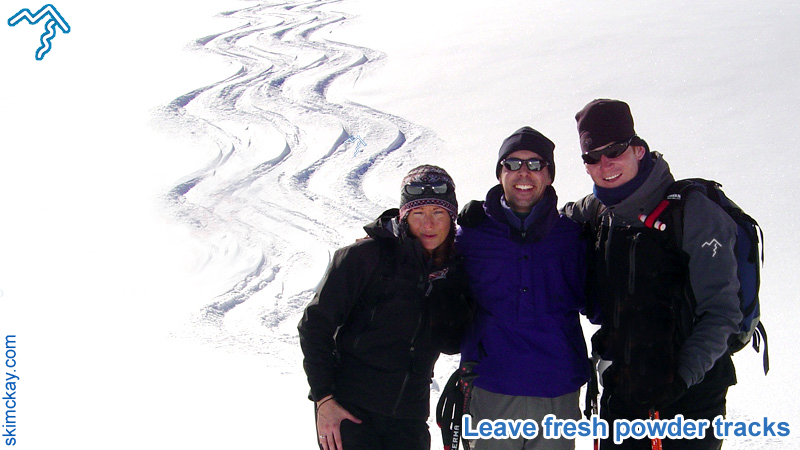 We had a completely marvelous week skiing with you. Liz, Anthony, Blanche and I found your clever, but careful and humorous introduction to off piste techniques invaluable. Within a few days we were all astonished that you were able to lead us safely and far away from the piste and the crowds to exquisite untouched valleys where we left near perfect tracks in the virgin snow. When we look at the photographs that you took, it is difficult to believe that those were our tracks and not those of seasoned experts! Whilst we know that this was just a beginning, the confidence that you inspired and the fun that we had just makes us want to do more and more ..........skiing on piste will always be a poor second from now on, roll on next season and many many thanks for bringing within our grasp something that we have tried in the past but never managed to secure.

I have skied for over 30 years and it is refreshing to meet someone as enthusiastic and passionate as Martin both off piste with myself and teaching our friends who were complete beginners. Martin installs complete confidence in everyone's skiing.

I am in my forties, I have decided to conquer my feelings so that I can enjoy winter sports holidays with my ski-mad children. Martin took time to work out how I best absorbed instructions and having decided that I was a visual learner, he taught by describing precise pictures of what I should be aiming for. To my absolute amazement, the Mckay Method worked incredibly fast and effectively. After only one session, I could look down a piste and feel happy anticipation instead of blind panic. See you next year!

I had a very good time when a mate and I did a week's off-piste with him. He has a very good manner. Now, I know you weren't talking about off-piste, so I bring as evidence..... My Wife!

A year or two ago, we booked a morning for her with him. I think she bombarded him in advance with emails of the "I'm nervous" character! I can't say exactly what bit of technique he sorted, except that her overall confidence shot up and what I knew she could do she actually started doing, both on and (gentle) off-piste. I'd recommend him if you are in the area.

Technique has always been extremely important to me as it forms the basic platform from which to seek adventure, without it my confidence is undermined.

Martin's thoughtful coaching on skiing technique on piste and off piste has helped me establish a very strong platform from which to explore.

This is the third time I have returned to Val d'Isere to receive ski coaching from Martin Mckay Skiing, I brought my son of 16 yrs old this time, he is an accomplished piste skier but wished to learn off piste control, Martin blew me away with his concise effective coaching, Jack displayed such a clear understanding of Martins coaching points. Jack left clean controlled ski tracks, great stuff.

Action is what will make you, Tap to avoid procrastination!